What could we possibly say more than: together we are strong and nobody can stop us!

TJK-E announces to have collected 235,727 signatures in ‘100 reasons to prosecute Erdoğan’ campaign

The Kurdish Women’s Movement in Europe presented the first results of the campaign “100 reasons to prosecute the dictator” in Zurich. The goal of 100,000 signatures has been well exceeded.

The Kurdish Women’s Movement in Europe (TJK-E) started the campaign “100 reasons to persecute the dictator” on 25 November, International Day for the Elimination of Violence against Women. The campaign presented one hundred women who were murdered during Erdoğan’s government. The women’s movement had set itself the goal of collecting 100,000 signatures by 8 March, International Women’s Day. The first results of the campaign were presented in Zurich on Friday.

In addition to activists from the TJK-E, representatives of the Alevi association FEDA, the “Women Defend Rojava” campaign, the PYD, PDA, Ni Una Menos, FIST and other groups joined the press conference in the Kurdish social center in Zurich. As Neslihan Kılıç explained on behalf of the Kurdish Women’s Movement, 235,727 signatures were collected worldwide as part of the campaign. The set goal has thus been well exceeded.

Neslihan Kılıç referred to the struggle of Kurdish women who refuse to submit to the Erdogan dictatorship despite violence, repression and war, and said: “With the ‘100 Reasons Campaign’ we have once again proven in the last four months that the Kurdish women cannot be silenced by the feminicide policies of the patriarchal systems. On the contrary, we have shown to the whole world that we have the strength to hold dictators accountable. Tens of thousands of people worked for our campaign to call for Erdoğan’s fascism to be brought to account. They inspired our sisters around the world who fight against fascism like Kurdish women.”

“Erdoğan must get his just punishment”

The collected signatures for the condemnation of Erdogan are now to be presented to the UN and other international institutions. The TJK-E said: “With his sexist political statements, decrees and decisions, dictator Erdoğan is directly responsible for the crimes that are committed against society and especially against women and children in Turkey, North Kurdistan, Rojava and northeast Syria, South Kurdistan, Shengal and Maxmur. Therefore, under international law, he must be charged with murder, torture, deprivation of liberty and rape. According to international law, there are ample reasons for dictator Erdogan to be tried for crimes against humanity and genocide. He is still hiding behind his office as President of Turkey, but people around the world see him as a dictator whose time is up and who must receive his just punishment.

The Kurdish Women’s Movement also pointed to the rise in violence against women and the massive repression in Turkey and added: “It is a shame for human history and justice that international courts have investigated the massacres, murders, rape and arrest of thousands of politicians, academics, journalists and activists just stand by and watch. That amounts to complicity.”

Second stage of the campaign

In the second stage of its campaign, the TJK-E wants to continue with the legal battle. Appropriate applications for this should be submitted to the UN. “We will continue to be the voice of all women and demand accountability for the crimes committed. At the same time, we will fight for femicide to be classified as a crime against humanity on an international level.”

The women’s movement is setting two priorities for the second stage of the campaign: the punishment of those responsible for the political murders of the three Kurdish revolutionaries Sakine Cansız, Fidan Doğan and Leyla Şaylemez on 9 January 2013 in Paris and the fight for the women abducted, raped and murdered women during the Turkish occupation of Afrin. 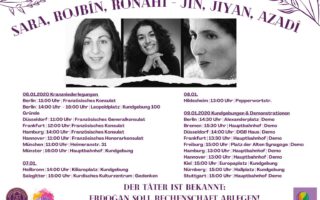 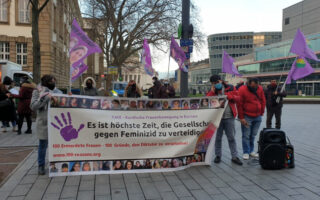