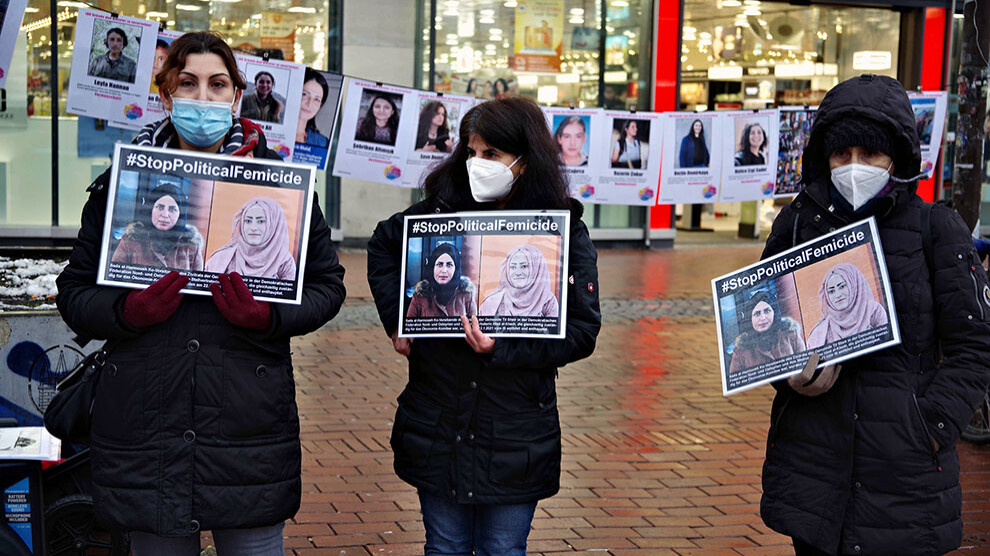 In Berlin and Hamburg, women took to the streets to demand the conviction of Turkish leader Tayyip Erdogan for his crimes against women and to collect signatures.

In Berlin and Hamburg, women took to the streets in support of the “100 reasons to condemn the dictator” campaign launched on 25 November by the Kurdish Women’s Movement in Europe (TJK-E).

On Frankfurter Allee in Berlin, internationalist women collected signatures for the campaign. On their commitment they said: “During the 18 years in power, the Turkish state under the Justice and Development Party (AKP) has committed thousands of unpunished crimes. Women have often been targeted by the Turkish government, which on the one hand normalises feminicide in society with its sexist mentality and policies, and on the other targets political women with violence, censorship, and imprisonment. Despite a flood of evidence, these attacks have not been resolved. The campaign aims to bring the main perpetrator of these crimes to justice. In addition, the campaign aims to draw public attention to the AKP/MHP’s feminicidal policies and thus prevent further murders and crimes against women. Overall, the campaign is situated within the framework of a worldwide struggle against feminicide. The first phase of the campaign is to collect 100,000 signatures by International Women’s Struggle Day on 8 March.”

In Hamburg-Altona, a rally was held by the Rojbîn Women’s Council as part of the campaign. The activists hung up pictures of women who were murdered by the AKP/MHP regime. In particular, they commemorated Sada al Harmoush, co-chair of the Til Sheir Municipality Civil Council, and her deputy Hind al-Khedr, who were targeted for murder by IS on 22 January because they were Arab women actively involved in local politics and campaigning for a democratic Syria. “These femicides represent a new high point in the long list of atrocities committed by the Erdoğan regime and are two more reasons why we want to bring the dictator Erdogan to justice. This is what we as the Kurdish women’s movement are demanding with our signature campaign,” said a spokesperson.

The activists collected signatures and many passers-by stopped. They also criticised the German government’s ignorance of the crimes of Erdoğan’s government in light of the Turkish foreign minister’s visit to Germany yesterday. 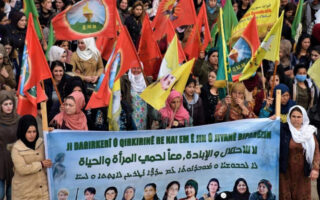