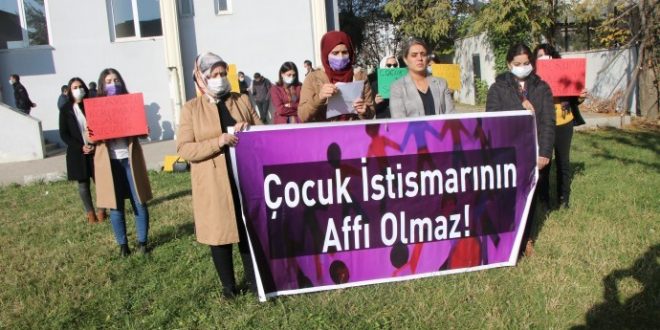 27 men rape a young woman. The reaction? Journalists and women are arrested during their protests to cover up the event.

HDP Women’s Assembly spokesperson Ayşe Acar Başaran said: “We will not allow such incidents involving uniformed people to be covered up.”

The Free Women’s Movement (TJA), Peoples’ Democratic Party (HDP), Women’s Council in Batman Gercüs came together to raise their voices and not allow the rape of a young woman by 27 men, to be hushed up.

“Child abuse is unforgivable” banners were opened, “Protecting rape is a crime against humanity”, “Don’t protect, don’t silence, report!” all slogans to encourage people not to put up with these inhuman conditions.

Gurbet Doğan, co-chair of the HDP Central District, said on behalf of the group that there are too many incidents involving law enforcement agencies in Kurdish areas. Doğan stated that the incident involving İpek Er and Gercüş was a policy of the state and said, “The release of Specialist Sergeant Musa Orhan, who raped İpek Er and caused her death, brought about the incident involving Gercüş. Rape and violence against women is not considered a crime, which means that these incidents are becoming more frequent.

HDPE Women’s Council spokesperson Ayse Basaran Acer said women and children in the country are exposed to cases of abuse on a daily basis. These are always increasing under the AKP government. Violence and murder are now part of people’s social reality.

Başaran noted that they hear the murder of a woman almost every morning. “We have become a society that wakes up every day with news of abuse against children. We are also very aware that special policies are being carried out in Kurdistan. İpek He was previously abducted by a specialised sergeant, raped for days and driven to suicide. However, Musa Orhan was only held for one week. Musa Orhan came out of the back door of the prison where he entered through the front door. And at this time, instead of saying that they will do their best to prosecute the perpetrator of this matter, instead of saying that they will be with the children and women, the representatives of the government, the Minister of Security and Home Affairs, have nothing better to do than to target people who stand up against such conditions.

“WHAT IS HAPPENING IN GERCÜŞ?”
Başaran is fighting back. In pursuit of those who asked the question “what exactly happened?”, she responded as follows:
“But here we call again, we call: We will not allow violence against women, cases of abuse, especially such incidents involving uniformed men, to be covered up. We will not allow criminals to be acquitted. The authorities should stop threatening us. We will not bow to threats. We will not take a step back. What they will do is to do their job. Perpetrators should be identified and punished. We will not be manipulated or threatened! This special war in Kurdistan must be stopped! We will continue to research and inquire. We are not silent, we are not afraid. We will not stop demanding justice. We will not stop decoding their crimes. This should be known as such. We stand by the side of those affected: you are not alone, we are here. TJA and HDP is here and we will fight and we will fight together!” 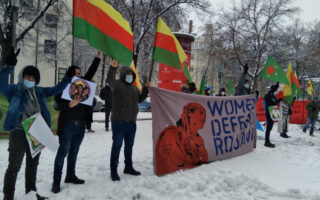