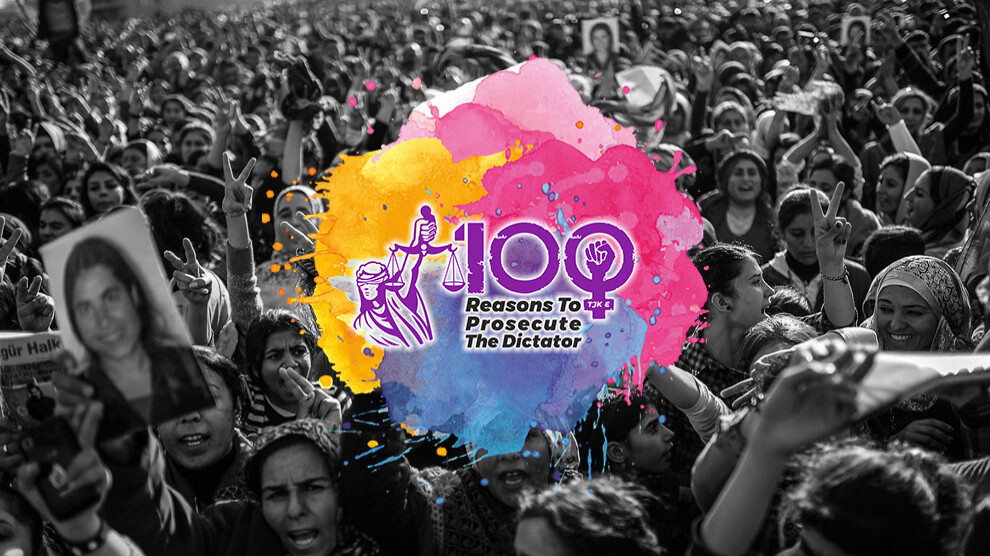 “We must be clear in our minds that Erdoğan’s conviction is not only the moment of victory for justice, but also saves many lives,” Berfin Gözen and Yvonne Heine explain in an interview with Kurdistan Report.

“In order for us to live freely, equally, fairly, in mutual trust and ecological balance, the demand for accountability is as indispensable as uninterrupted resistance by women as free society against sexist, capitalist exploitation is necessary. and this from Kurdistan to Chile, from Poland to Sudan, from the United States to Iran, from India to Europe, Turkey, in short a resistance of women and the free societies all over the world so that we manage to really end the oppression, the rapes, the murders of women, the ignoring and violating of rights and harassment. ” With these words, the Kurdish Women’s Movement in Europe (Tevgera Jinên Kurd li Ewropayê, TJK-E) announces to launch a new campaign on the occasion of the International Day of Struggle against Violence against Women on 25 November: “100 reasons to condemn the dictator”. The initiative aims at the international recognition of feminicide as a crime against humanity and the sentencing of Turkish President Recep Tayyip Erdoğan at the Criminal Court. Kurdistan Report spoke with Berfin Gözen and Yvonne Heine, members of the Kurdish Women’s Office for Peace (Cenî e.V.), about the current campaign.

The Kurdish Women’s Movement in Europe (Tevgera Jinên Kurd li Ewropayê, TJK-E) has launched a new campaign for the International Day of Struggle against Violence against Women on 25 November 2020 under the title “100 Reasons to Condemn the Dictator”. Why did you as Cenî decide to launch such a campaign and what are your goals?

The Kurdish Women’s Office for Peace Cenî e.V. was founded in May 1999 by Kurdish and Turkish women living in Europe with the aim of strengthening the international solidarity of women for peace processes in Kurdistan and worldwide. For us, commitment to peace does not only mean opposing wars and any form of oppression. Rather, the commitment to a free and ecological society based on social justice and an alternative to the patriarchal system of rule is an essential part of our peace work.

With this objective, Cenî campaigns against violence in the name of “honour” and other forms of feminicide. We organise the annual Zîlan women’s festivals, initiate events, projects and actions as well as delegation trips to Kurdistan. Another important area of work is solidarity with women who have suffered through war, torture, displacement, political persecution, racist and gender oppression. Through our publications, we want to bring the voices and demands of women for a just peace to the public, present different organisational approaches and the work of women’s movements and strengthen the international networking of women’s organisations. Therefore, it was a matter of course for us to participate in this campaign.

For us, solidarity is an important part of our political self-image. This means not only standing by the side of those affected, but rather standing up for those who can no longer or may no longer do so for themselves. The year 2020 was marked by political arrests in Turkey. The AKP government deliberately tried to silence the strong voices of anti-patriarchal politics by arresting women. Among other things, women have been sentenced to 3 years in prison for taking to the streets on 8 March, International Women’s Day, and standing up for their rights. This is a state of affairs that we cannot and will not tolerate! We want to send signals and show solidarity with these women who are being deprived of their right to express themselves. At the same time, it is obvious that such anti-women policies are a danger to society as a whole. We in Europe must use our position and standing to strengthen these women once again, to show them that we stand behind them and also in front of them. This is what we understand by a common international struggle.

The Kurdish women’s movement has long been demanding that the UN define the systematic murder of women as feminicide and include it as a separate category in international law, as this campaign is now also demanding. Why does this occupy such a central position in the women’s struggle, and what would be achieved by including feminicide in international law?

We live in a patriarchal society. The symptoms show up in different ways all over the world, but they have a common goal: the oppression of women. Discrimination against women is institutionally and socially embedded and thus a 24/7 threat and danger to all identities that do not conform to the gender order. What we call feminicide is a result of such a patriarchal order: the systematic killing of women because of their gender. As long as we do not take this state of affairs seriously and do not recognise the concept of feminicide, we deny this reality of people within our society and ensure that these inhuman conditions continue. Which we can see quite clearly from the 100 reasons that the campaign points out, for example. We almost have to say here that we have ONLY listed 100 women, there are unfortunately an infinite number, not only in Turkey but everywhere. We have also drawn attention to feminicides in Germany with campaigns and events here. You have to imagine: We deny patriarchal murders of women, call it family drama, misfortune or whatever, in order to distract from the real problem. What is a family drama or a misfortune, an accident? Nothing more than individual fates and personal problems. The cause then does not lie in society or social, political structures and institutions. However, this is not the way to remedy these conditions. With the term “feminicide” we finally admit to ourselves that these are more than just individual fates and as a society we take responsibility for a solution to this situation, which is not much different worldwide.

As the Kurdish women’s movement, we say that women were the first colony. With this, we express that today’s mechanisms of oppression are also based on the enslavement of women. If we look at history, we know that this enslavement was enforced with indescribable violence and continues until today. The war against women is the basis of today’s relations of domination. Only it has been veiled and made invisible to such an extent that we no longer even recognise its extent. For example, genocide is recognised as a crime against humanity in international law, but feminicide is not. We see a contradiction there, because we know that genocide can only be carried out through feminicide! If we look at the genocide and feminicide in Şengal, we can clearly see that the war against women is a method and systematic to eradicate a society. In Şengal, êzîd women were specifically enslaved, raped and murdered, especially in order to continue the destruction and traumatisation of society beyond the direct physical attack. In war, patriarchy shows its true face quite unveiled, and we should never forget that today’s nation states are built on this ground.

You call Erdoğan, the Turkish president, the main perpetrator of feminicides. Why?

As we have just described, the roots of feminicide lie in the patriarchal system. Erdoğan’s policies pursue exactly such a system, deliberately, purposefully and absolutely planned. For example, one of Erdoğan’s poems says: “Democracy is only the train we climb on until we reach our destination. The minarets are our bayonets … the mosques are our barracks”. On 8 March 2008, he publicly declared: “Feminism has negative consequences from an ethical and social point of view. As soon as a woman falls for the feminist movement, with the idea of unconditional freedom, she annuls many rules and values that are indispensable for the family.”

The quotes speak for themselves and reflect the character of his politics and his party. Anyone who follows such a line and puts it into practice is deliberately poisoning society and promoting misogyny. The more the AKP expanded its power within the state, the more it turned out to be an autocratic-dictatorial party that wages war against its own people at all levels, especially against women. Thus, Erdoğan leaves his fingerprint on every feminicide. We want to get to the root of the problem and not scratch it superficially, which is why he must be condemned. We must be clear in our minds that Erdoğan’s conviction is not only the moment of victory for justice, but also saves many lives.

What is the concrete form of your campaign and what can support for it look like?

The campaign is the campaign of all of us! For a long time we have been following these conditions, like many other people, we have been thinking about what we can do to finally stop this targeted war violence and the attacks on humanity. We have racked our brains over how we can raise awareness of the conditions in Kurdistan here in Europe, but also worldwide, and how we can transform the indignation, which ebbs and flows again and again, into concrete power to act. This campaign hits the core and the cause. A success of this campaign means at the same time a success for the affected people who cannot defend themselves or whose means and methods are limited due to their life situation. A success of this campaign means that we are finally sending signals worldwide against dictators, patriarchal conditions and thus also against war. A success of this campaign means taking a huge step towards a peaceful and communal future.

The signatures are important so that together we can take the next step and achieve something on an institutional level. But it is not enough to simply sign ourselves. We want all people in solidarity to draw the attention of those around them to this campaign and, by drawing attention to it, to raise awareness of war conditions around the world. So don’t just sign yourself, but involve your friends, family, work colleagues etc. and make it a collective campaign. We are looking forward to actions, events and exchange. On our campaign page you can find materials such as posters, information dossiers and other exciting things about this topic. You are also welcome to write to us, get information, plan actions and events together with us. It is OUR campaign in the sense that we are and can all be a part of it. 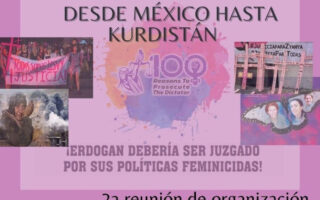 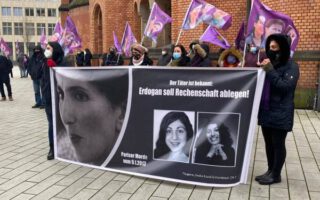